Jen Atkin is a hairstylist who has worked with Jennifer Lopez, Kim Kardashian, Katy Perry, Alexander McQueen, Alexander Wang to name just a few. She has also launched her own brand of products in OUAI Haircare. Working for the exclusive OUAI Haircare UK distributor MMCL I’ve had a busy week keeping up with Jen as she has a tremendous work ethic.

She hosted a first for OUAI Haircare – a pop-up in the Hersheson salon. The party in the evening was fabulous.

We visited the Harvey Nichols and Selfridges stores to check out the OUAI Haircare displays. Jen had met with Sir James Dyson earlier in the week so we got a little distracted by the new Dyson Supersonic.

I spent another day with Jen as she and fellow hairstylist Chris Appleton (he’s worked with Vogue, Chanel, Rita Ora, Kate Moss and more) passed on their knowledge to other hairstylists at their Mane University masterclass held at DryBy London.

I’ll be working with Jen again later this year and we’ll see how much more we can pack into a week! 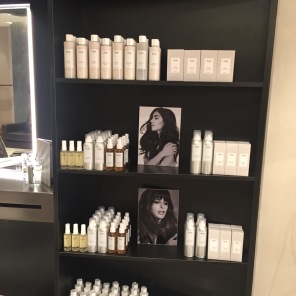 Repost from @mmcl_ldn
Could not resist this limited edition bath product from @templespa
#Repost @sarahjanefroom
Delighted to welcome Mahakala into my collection!